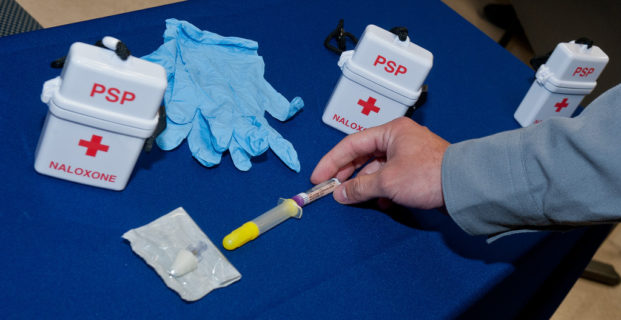 This research on the Italian experience of the distribution of naloxone to people who use drugs  and in the wider community (Take Home Naloxone-THN) was born from the need to fill a gap of knowledge, information and communications concerning more than twenty years of experience of harm reduction (HR) and risk limitation (RL) correlated to opiate drug use in Italy.

The scientific literature about THN in Italy is scarce and limited to a few local studies and dated, so much so that the more recent international reviews paradoxically rarely  include Italy, even if it  is one of the few national experiences of THN that is significant in terms of duration, continuity and range of the intervention. An emblematic example is the following: the studies cited indicate 1996 as the year when the first THN intervention began, whereas already in 1991 the first street outreach programs had adopted this method, anticipating what then happened in other countries. It is not the responsibility of international researchers of course for this gap, as they have, and continue to have, difficulty in accessing data and sources regarding the Italian experience.

This shortfall has diverse reasons, the first of which is political in nature. As was stated in the first chapter of this report, the politics of HR in Italy “ are done but not mentioned”, as a popular saying in Italy goes. As far as the practices go- the interventions and the services, which are spread out in an unequal manner through the regions of this country – they cannot be crosschecked with a clear national policy direction that recognizes HR effectively as one of the operative pillars and a transversal approach in the national drug strategy. The research on HR and therefore on THN pay for this lack of a clear policy direction in terms of inattention and a lack of investment. There are of course also reasons relating to insufficient resources, investment limitations and cuts that place services in difficulty and bring health workers-  who are the first observers and experts of this intervention- to neglect monitoring and evaluation of outcomes  in favour of front-line work. Further, there is a certain weakness in the otherwise active movement of advocacy for HR, which in Italy has a strong alliance between health workers, associations and PWUDs, but that still today have little impact on orientating policy decisions. Nonetheless, certain gaps in HR research have been closed in recent years by precisely this network, despite scarce or no resources at all.

The lack of studies regarding the evidence and results of THN also has diverse negative consequences. The first among these is the increased difficulty to obtain political support for the practices of HR, in a kind of vicious circle.  As important as this, it translates into a lack of knowledge and analysis about the interventions, which are necessary for those very same health workers, in order to adjust objectives, strategies and work methodologies to increase results and suitability.

The idea for this research began a few years ago precisely from the need to evaluate, innovate and develop THN interventions in Italy. It was necessary to identify the strong and the weak points and to accept the challenge of the new drug scene and the relative reorganization of the interventions. The research project had a particular decisive push in the past two years, when some of the researchers- who promoted and conducted this study- began to receive questions on the Italian model of THN from different parts of the world. These were from researchers, health workers or PWUDs who were beginning to organize for a global campaign of advocacy to extend the THN practice to many countries where it is not allowed or where it is not accessible. This is one objective that we strongly share, a campaign which we will join, and one we think we are able to contribute to based on experience. We therefore acted on this “push”, finding the necessary support in two private sponsors and in our own (limited) resources.

This is therefore a research that looks in two different directions: one is national- to contribute to the development, the up-dating and the definitive accrediting of THN in Italy. The other is international: to provide the THN campaign with information and knowledge. It is a quanta-qualitative research that involved two groups of protagonists- health workers and PWUDs . We are aware of the importance of developing a systematic data base and we plan to continue to work on this, with new alliances and inviting renewed attention from those institutions that should, as their mission, be occupied with this. Nevertheless, we also know how much qualitative research can contribute to knowledge when what we are dealing with is human behaviour, organizations, empowerment and health.

This research is a new chapter of that push “from the grass-roots”, needed to fill the missing gap in knowledge that definitely has need of more actors (above all institutional) and more resources. Knowing the importance of involving more stakeholders, Forum Droghe (an association for advocacy, training and research on HR and on drug policy reform) has promoted an alliance with a research body (Eclectica), and three Public Addiction  Departments (ASL 2, and ASL 3 in Turin and ASL 1 in Naples) which are among the most active regarding HR. It has also involved a wide network of workers in this work: associations, private and public services and individuals who use drugs (among these are ITARDD,  the Italian network for HR; CNCA,  National Coordination for Residential communities, and for PWUDs, Isola di Arran and IndifferenceBusters)

This alliance is emblematic of the positive face of HR in Italy and its potential.

We wish to thank all the managers, health system workers, professionals and peers, from the public and private sectors and their networks, who have collaborated not only by responding to the questionnaires and participating in the focus groups, but also by making the data regarding their interventions, accessible. We also wish to thank the individuals who use drugs and their associations, who provided valuable contributions of their experiences, reflections and evaluations. Without their adhesion and willingness, this research would not have been possible.

This research was coordinated by Forum Droghe and conducted in partnership with Eclectica, who collaborated to the elaboration of the research project, the survey and analysis.  Other partners were the ASL ex Turin 2, ASL Turin 3 and ASL Naples 1 (Local Health Agencies – Addiction  Departments), which were all involved in the elaboration of the research project, scientific consultancies in various phases of the project and the activation and guarantee for the survey data.

Those who actively contributed to the research process were:
ITARDD – the Italian Network for Harm Reduction; CNCA – National Coordination for Residential Centers, and the associations Isola di Arran and IndifferenceBusters.

Susanna Ronconi was responsible for the editing of the research report, in collaboration and consultancy with the research group.  Those who participated in the writing up of the report were: Franca Beccaria, Antonella Camposeragna, Sara Rolando, Paolo Nencini and Paolo Jarre.

Supported in part by a grant of  FOSI – Foundation Open Society Institute, in cooperation with  the  Public Health Program of Open Society Foundation.

With an unconditional contribution from Indivior Italia srl, which did not influence the content of the research in any way whatsoever.